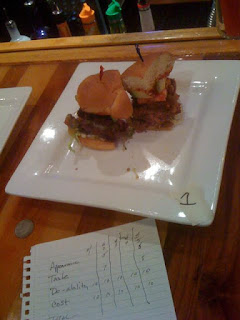 The second meeting of the fraternal order of the Bisbee Grill Burger Advisory Board, or BIGBAB, took place to see which cook would win the competition for the next Bisbee Grille burger. Those competing were Cricket Rodriguez, David Gonzalles, Via Gomez, and Carlos Lebron.
The Advisory Board meticulously went about to test taste and judge each burger, making notes and brooding over beef. Who won? Cricket Rodriguez! for her Buffalo red hot burger, which packs a punch of blended hot sauce and a quick flash in the deep friar. What is created is one of the juiciest delicacies that will warm you up on a brisk Bisbee winter's day. She received 200 dollars for her culinary creation, and the honor of having put another burger on the menu.
Posted by Unknown at 6:22 AM No comments: Phone in your order!

Our Facebook page contains the most up to date menu and features that change daily. We do not accept reservations for a party of fewer than 6 guests. To contact us please call (520) 432-6788.